Is Featherweight The Most Dangerous Division In The UFC? 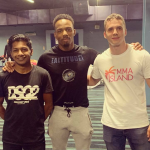 Traditionally, MMA fans have widely regarded the 155lb and 170lb divisions to be the deepest and most dangerous in the world’s top MMA promotion. However, the UFC men’s Featherweight division (145lbs) is arguably nowadays challenging this notion, dispelling the old idea (circa 2015/16) that the division was languishing in the shadow of ‘The Notorious’ Conor McGregor, who stormed through the rankings, captured the belt and subsequently abandoned it to pursue his ambitions in the two aforementioned weight classes above.

145lbs holds many elite fighters at the top of the divisional rankings currently ruled by the champion Alexander ‘The Great Volkanovski’, who faces Brian ‘T-City’ Ortega in his second title defence at UFC 266 in September. As well as this, pound-for-pound ranked fan favourite Max Holloway is ever present, waiting to reclaim the belt that Volkanovski took from him across a pair of razor-thin decisions. The top 10 has played host to a number of dangerous contenders for a while now.

For example, the pair of exhilarating strikers: Yair Rodriguez and Zabit Magomedsharipov. Recently, Zabit was confusingly removed from the rankings due to inactivity- despite having fought more recently than Rodriguez (who remains ranked no.3), with the pairs last bouts coming in October and November 2019 respectively.

Furthermore, this top 10 has been bolstered by more recent additions; Arnold Allen’s recent win over Sodiq Yusuff extended his win streak in the UFC to an outstanding 8, thus vaulting from hot prospect to bona fide contender; Edson Barboza’s move down from Lightweight has seen him put together an impressive 3 fight run at 145 (dubious judging notwithstanding); and former GLORY standout Giga Chikadze has displayed his excellent kickboxing skills in his undefeated 6-fight streak since joining the UFC in 2019, earning himself a no.10 ranking.

Yet, there is wealth of talent at the top of almost all of the UFC’s divisional rankings, so beyond this, it is the crop of emerging young prospects that really makes the future of Featherweight something to get excited about. In the past year and a half, the likes of Bryce Mitchell, Movsar Evloev, and Ilia Topuria have all broken into the top 15. All three men are aged under 30 and hold impressive professional records, with each undefeated in their respective UFC runs at featherweight so far.

‘Thug Nasty’ has the jiu-jitsu skills to present problems for anyone in the division, with 9 of his 14 career victories coming via submission, and even securing a rare twister against Matt Sayles in 2019. In his most recent outing, Mitchell displayed not only his Jiu-Jitsu skills, controlling Andre Fili on the ground, but also some promise on the feet: out-landing ‘Touchy’ (a slick and powerful striker in his own right) and finding repeated success with overhands and lead-leg sidekicks on his way to a unanimous decision victory.[1]

27-year-old Evloev combines snappy boxing with fast head-movement to piece up his opponents on the feet, and bolsters this with well-timed reactive takedowns and slick scrambling ability to make his opposition uncomfortable wherever the fight goes. With 5 wins from 5 in the UFC, including hard-fought victories over Mike Grundy and Nik Lentz, Evloev is ever-improving and will surely be a mainstay in the featherweight rankings in the future.

Finally, Ilia Topuria announced himself to the wider UFC audience on the big stage this past weekend at UFC 264, refusing to engage with Ryan Hall’s rolling antics, eventually earning the TKO at the end of the first round. Hall, beforehand perceived as the ‘most ducked’ fighter in the division, had his one-dimensional gameplan exposed by Topuria. A calm and collected prospect who is a BJJ ace in his own right, ‘El Matador’ also has power to boot, as he displayed in his first-round starching of Damon Jackson in December 2020.

At their young ages, and relatively early in their MMA careers, it is reasonable to assume that this crop of talent’s best years still lie ahead of them, as for the most part they are already well-rounded and dangerous fighters in their own right. Hence, they will no doubt provide interesting future matchups with the division’s current elite, as well as each other in the years to come.

Talented younger prospects at Featherweight are not limited to just the top 15 however, with many promising unranked fighters who may not yet be on the radar of those at the top quietly working their way towards those rankings. England’s Lerone Murphy has maintained the 0 on his record in his 3 fights in the UFC, battling through to a draw with the ever-tough Dagestani Zubaira Tukhugov, finishing Ricardo Ramos in the first round, and most recently outworking Douglas Andrade for a UD victory. He has displayed dynamic striking as well as toughness and ability to overcome adversity, particularly in his debut when he was dropped early and taken down 6 times but managed to soldier his way back into the contest on his way to a split draw. ‘The Miracle’ faces another tough test when he matches up against another young prospect, 25-year-old Canadian finish machine Charles ‘Air’ Jourdain in September. The winner of that bout will likely in a great position moving forwards to push towards the murderer’s row that is the division’s top 15.

Seung Woo Choi is another young unranked prospect who has also shown great promise. ‘Sting’ endured a tough start to his UFC tenure, first dropping a decision to the aforementioned Evloev, and then being submitted in the final round by Canadian BJJ maestro Gavin Tucker. Since then however, he has put together a 3-fight win streak, including an impressive decision over 2020 standout Youssef Zalal, as well as a beautiful 90-second KO over veteran Julian Erosa with a vicious left hook. Standing at 6 feet tall and with a 75-inch reach, Choi is a long featherweight who has all the tools to be a threat at 145 for many years to come.

Overall, it is clear that whilst in terms of depth and skill level, Featherweight may not just yet be on the level of the most frequently cited ‘best’ UFC divisions in Lightweight and Welterweight, there are many reasons to believe that it could start to become a part of that conversation. With dangerous long-time contenders as described in the division’s current elite, the youthful stars that are just now breaking through into the top 15, and finally with various dangerous prospects that have yet to make that breakthrough into the rankings, the future of the UFC’s featherweight division is most certainly interesting.