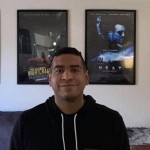 Today’s interview is with rising UFC prospect, Adrian Yanez. He was signed via Dana White’s Contender Series in August of this year and had his official octagon debut on October 31st. Check it out below!

You get compared to Jorge Masvidal in the looks department, have you met him since signing to the UFC? Figured he would reach out like the whole thing with Chase Hooper/Ben Askren father/son dynamic.

No, I haven’t met Masvidal. It would be cool too but no contact as of late.

Do you prefer the smaller octagon at the Apex when fighting?

What’s your favorite strike/submission to use in any fight?

I do love the triangle choke. Was one of my first submissions I learned after the armbar. Loved that choke since I was a white belt.

Obviously, you’re on a win streak now but your three losses have been decisions. Does this factor into your training camps? Like I need to go out there and finish fights and not leave it in the hands of the judges.

I just always assume that the officials are never on my side. So I train for finishes and/or to outclass my opponents. Don’t ever like leaving it in the hands of the judges, but when you do, got to make sure you put it on the other person.

Do you keep your walk around weight low in case the UFC calls you with a short notice fight?

I’m always on a year round diet. Love staying active. Love the feeling of being in shape. So even if I get a short notice call I can get a fight.

Speaking of training, tell us about Metro Fight Club. Who are some killers you’re training with?

My main training partners are Leomana Martinez and Jacob Silva. Both are fighters that are ready for the UFC stage. Have great talent and grit, which rubs off on me. We also have plenty of amateur fighters that want to be in the same position. Got a stable of guys to train with. Then, we got our head coach Saul Soliz, if it wasn’t for him I wouldn’t be in the position I am today.

Favorite place for eating pizza and/or cinnamon rolls? Other than Cici’s, of course!

My favorite place to have pizza is a place called Mario’s Pizza down here in Texas. Been going to that place since I was little and it’s never disappointed me!

How do you recover after a fight?

I usually go into a food coma.. I eat everything. Lol.

Who are some bantamweights you look up to?

I’ve always looked up to Dominick Cruz, just his style and also his mentality towards MMA.

Walk us through your pre-fight ritual.

I really don’t have a pre-fight ritual. I use to have them but not anymore.

You mentioned being influenced by Frankie Edgar/Jose Aldo/Cain. What are your favorite fights of theirs?

Cain vs JDS 3 especially since I got to be there live. It definitely motivated me to see him fight live. Was an honor. Jose Aldo vs Chad Mendes 2. Frankie Edgar vs Pedro Munhoz.

Have you thought of a nickname for Bruce Buffer to announce?

No,  not really. Haven’t thought too much about it.

Your next opponent is former Combate Americas bantamweight champion Gustavo Lopez. What kind of training goes into preparing for a former champ?

He became the champ for a reason. He’s tough, durable, skilled, and has the champ mentality. So I’m preparing like it is a 5 round title fight. Its still early, but we are also implementing tape study. Just so we know what exactly we are stepping into the cage with.

What do you want to be remembered for at the end of your career?

I want to be reminded as a great fighter, somebody that did great for the sport of MMA inside as well as outside the cage.