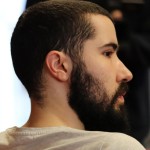 Pedro Carvalho (11-3 MMA) is the Portuguese promise in MMA and one of the biggest rising stars in Bellator.

From the city of Guimarães, with Lusitanian blood and a spirit of conqueror, he comes to prove to the world why he is a threat to the whole world of MMA.

In September 2012, Pedro has his first professional fight. After just over 4 years, in January 2017, he joined one of the most coveted MMA gyms in Europe, SBG in Ireland.

At the time, Carvalho had a cleaning job in a hospital when he started to live in Ireland, something that could easily influence his mentality and distract him from the fighting game.

“The man (Carvalho) works full time hours cleaning a hospital and still does more hours in the gym than most full time fighters.”

His coach and mentor John Kavanagh thought that was no hope for the Portuguese to have success, as he was fighting in parallel with his job and 4-3 as his cartel on MMA.

However, against all odds, Pedro Carvalho won the belt in 2018 and becomes the lightweight world champion in the Cage Legacy.

“Really devoted himself to a training, never missing a session, always smiling and always working.”

With a warrior spirit, the Portuguese today has 4 victories in 4 fights at Bellator, suppressing opponents like Daniel Crawford (10-3 MMA), Luca Vitali (11-6 MMA), Derek Campos (20-11 MMA) and Sam Sicilia (17-11 MMA). The last three being by finish.

“The only thing that I asked was opportunities.”

The opportunity has been given! This Thursday (November 12) Pedro Carvalho will be able to achieve his 5th victory at Bellator 252 and take the belt from the current champion Patrício “Pitbull” Freire (30-4 MMA).

This fight in addition to the belt up to 145lb division, also gives the pass to the semi-finals of the Bellator Featherweight World Grand Prix.

Winning the tournament will bring more than just the gold in the belt, as the winner will bring $1,000,000 back home.

Despite the difficulty of the struggle that Pedro went through, with hard work and dedication, he is now very aware of the danger he brings to the octagon.

In Pedro’s words “esta merda é toda nossa” and as a Portuguese as myself, I know it is.

Just a guy that likes MMA.